In which I’m the only person in my guesthouse who doesn’t know there’s a typhoon in the area.

Jeju-do is the largest island off the coast of the Korean Penninsula and is home to many natural wonders, seeing as it’s a volcanic island. Hallasan, the highest peak in Korea, can be seen from all corners as it’s situated right in the island’s centre. The island was also voted one of the “New7Wonders of Nature”; a title it holds loud and proud (albeit with some controversy, as there was no limit on the number of times people could vote, and thus the Jeju government spent a load of money on a campaign to get citizens to vote as much as possible).

I had 5 days on the island, and didn’t get to see as much as I would’ve liked. Although small in area, I didn’t have a car, and was thus limited to the bus system. Although it got me where I wanted, it took upwards of 1.5 hours to reach certain places.

If you find yourself in South Korea I highly recommend taking a few days for Jeju. It’s quieter than the cities (at least when I visited in mid-Sept; but be sure to avoid Korean Thanksgiving). Here’s how I spent my time on the island.

A no-brainer, seeing how these were both a few minutes walk from my guesthouse. It’s only 2000w to enter (1000 if you’re a youth age 13-24). Although I saw loads of tour buses in the parking lot, there weren’t a lot of people inside the grounds. The area is pristine, and who doesn’t love a waterfall. Right nearby, Seogwipo harbour is a great walk, as a bridge takes you over the crashing ocean waves onto a small provincial park and island with a walking trail.

I have been aggressively trying to get more people to visit this gorgeous exhibit. I passed it on the bus ride to my guesthouse and knew I had to see it for myself. The director has collected a good 95% of all the shells and corals on display themself (with the other 5% coming from people who want to help). While the price is a bit higher (6000w) I spent a good 2 hours here and had the whole place to myself. The ambience is beautiful and calming. There’s also a cafe on site. 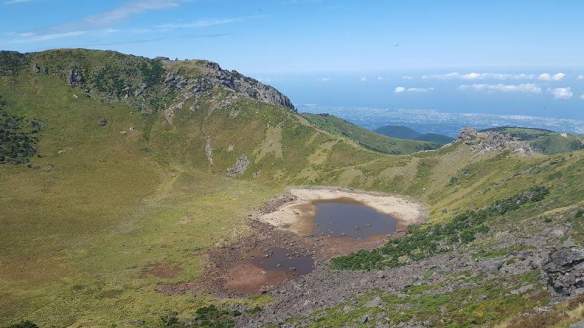 9.6km. That was all holding me from the peak of the highest mountain in South Korea. 8:16am I began the hike. 11:35am I reached the summit. They recommend giving yourself 5 hours to ascend, and of course I took that as a challenge. The last 4 km were brutal as it was basically stairs non-stop (Grouse Grind has NOTHING on Hallasan). I was lucky enough to catch the last sunny day before the mountain closed due to the windy weather, and it was absolutely breathtaking to look down and see the entire island at your fingertips.

Macaroon smoothie. That is all.

Another walkable waterfall. This one you can actually walk up close to, and witness it fall directly into the ocean. It was more crowded here than at Cheonjiyeon, even though the weather was clouded.

Also called Jungmun Daepo Coastal Walk, these columns stretch over 2km along the Jeju coast. They were formed from the cooling and contraction of lava, which results in “stacks” of hexagons. As it was a windy day, watching the waves crash over these pillars was breathtaking.

Jeju has a lot of markets. This one was right near my guesthouse. I ate dinner there basically everyday. Grilled pork, etiquette, steamed barley bread…andof course, the pictures octopus bread (SO GOOD).

More hiking to see a crater. And not at sunrise. It took me 1.5 hours to bus here, but the views were worth it. I would love to come back again for sunset, and take a walk away to get pictures from further away.

And that was Jeju! I’m currently sitting in the Busan airport waiting for my flight to Osaka, so my next post may be about Japan. BUT I also visited Damyang and Suncheon and would love to write a post on those 2 places, so keep posted!